Use of X lines and II lines. Where does it come from and how does it work?

More and more practitioners are beginning to use X and II lines in their practice to assess the stretch reflex using Manual Muscle Testing.

In Manual Muscle Testing we have 3 responses from the body:

Instead of manual inhibition we can ask a patient to look at II lines and with normal function of the reflex we will get an inhibition and a facilitation of the tested muscle with X lines.

This phenomenon was discovered and explained by Dr Jose Palomar in 1995 and the paper was published in AK release in 2000. Dr Palomar read an article about car accidents happening in USA. For some reason when the parallel line marks were applied on the road, the police records reported double the amount of car accidents. As soon as they changed the marking for “broken lines”, the number of accidents decreased. Doctor Palomar thought of a reason and discovered that II lines affect the organisation of CNS. He than tried to test it on his patients and discovered that showing the patient II lines inhibited the stretch reflex and X lines caused facilitation.

He tried to look for a neurophysiological explanation. When we look at parallel lines our visual system is involved, along side with vestibular and proprioception systems. As parallel lines do not have a spot of fixation, the visual system will report “some kind of a movement” to the CNS. At the same time the vestibular system reports that there is no movement and that the body has remained static, as does the proprioceptive system. As a result the brain receives contradictionary information from its systems and as a protection it will globally inhibit the stretch reflex.

When we look at the X lines there is a point of fixation for the eyes and no imbalance occurs, so CNS perceives this information as normal and it has no reason to inhibit the stretch reflex.

The same response will happen with any vision illusions. The brain will inhibit the stretch reflex. 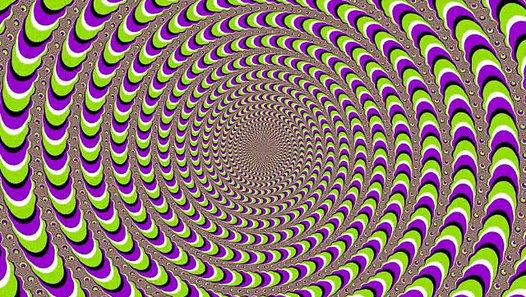