The method of Proprioceptive Deep Tendon Reflex (P-DTR) was founded and developed by Dr. Jose Palomar and has been successfully used in clinical practice for several years. P-DTR is the first neurological manual therapy based on neurology, neurophysiology, biomechanics and basics of Applied Kinesiology. P-DTR is a neurological, reflexogenic system, which efficiently treats a wide spectrum of functional problems and solves musculoskeletal, gastrointestinal, hormonal, chemical and emotional dysfunctions. Dysfunction is a physiological and reflexory disorder of the internal organs, which in most cases has a compensatory character. The main goal of the P-DTR treatment is to restore optimal reflexive activity of the nervous system to stimulus. This includes its motor and gland response, which would result in no symptoms of pain or discomfort perceived by the client, optimal range of motion and accurate appropriate adaptation to the conditions of the external environment. In other words, Neurological Health restores this way.

P-DTR is a very gentle, non-invasive, and painless method based on the real time manual effect of particular sensory receptors on the human body. Doctor Palomar created a unique system of neurological challenges and has discovered the predictable “rules” that demonstrate how the CNS responds to stimulus. He has demonstrated extensively the difference in the CNS response under normal conditions (no dysfunction) and during the stimulation of a dysfunctional afferent input. The types of manual afferent inputs (stimuli) that are used can be produced in a variety of ways including light swiping (to stimulate the receptors of touch), local stretching (to stimulate Golgi receptors), deep pressure (Pacini receptors) and many more. Today, P-DTR works with most of the exteroreceptors, interoreceptors and proprioceptors that form the afferent input to the CNS.

The physiological explanation of this method is logical – each type of receptor (for example: Golgi, Pacini, vibration, nociceptors etc.) is stimulated and when the threshold for that receptor has been exceeded by the amount of stimuli, the stimuli are converted into electrical impulses. These electrical impulses form the afferent information that reaches the CNS with each type of input being relayed along their respective pathways. The CNS receives this information, interprets it and makes a motor or gland response based on the synthesis of all the information it has received. For example, the sensation of PAIN. It is synthesized directly in the brain and is a complex product of the information from the nociceptive, proprioceptive and exteroceptive systems. Put simply, the sensation of pain would be the interpretation of the brain based on a complex integration of information from variety of different sources.


The main principles of the P-DTR concept

• The CNS controls all functional processes of the body at physical, biochemical, endocrine, emotional and mental levels

• Any functional or dysfunctional changes are deﬁned by CNS

• The CNS receives and interprets external and internal information 24/7

• Aberrant, distorted, excessive threshold signal from the receptors will cause neuromuscular, endocrine, or behavioral dysfunctions

• The CNS will constantly modulate incoming signals to be able to control the afferent ﬂow, enabling the person to make sense of the world around them and respond appropriately

The P-DTR method provides the tools and assessments to locate and diagnose the dysfunctional receptors, to stimulate all parts of a dysfunction, to ﬁnd the priority area, which is most important for the nervous system, to control afferent information ﬂow and to reset it when it is dysfunctional, thereby altering the integration of all noxious stimuli and the formation of sense of pain itself.
The theoretical core of the method is pairing of dysfunctional afferent signals. The excessive afferent information, which arrives to CNS from the paired receptor ﬁelds and the quantitative change of the information ﬂow from one ﬁeld, inevitably leads directly to the change of the information ﬂow from another ﬁeld. In other words, any stimulus to the CNS from a dysfunctional receptor will be compensated.

A neurologically healthy and well-organized CNS constantly receives and analyses the incoming information to produce an appropriate motor and/ or gland response. In this way, we can say that when the threshold signals from receptors are within so-called “green zone” (optimal zone of normal function), this means that the information is under control, it is managed by the CNS and the CNS has enough resources for self-compensation, self-regulation and optimal daily performance. Those receptors are called “functional” and ﬁre at a certain optimal range of action potential threshold.

A “dysfunctional” receptor has an altered action potential threshold (too high or too low), which means that it is extremely energy inefﬁcient and itself is a source of systematic stress for CNS as this alteration to normal function must be compensated for.

In case of high signals from such receptors, the CNS will always choose to compensate for these signals, regardless of the consequential effects on the body, which can lead to a number of dysfunctions such as illnesses, instability, limited range of motion, lack of energy, emotional issues, etc. 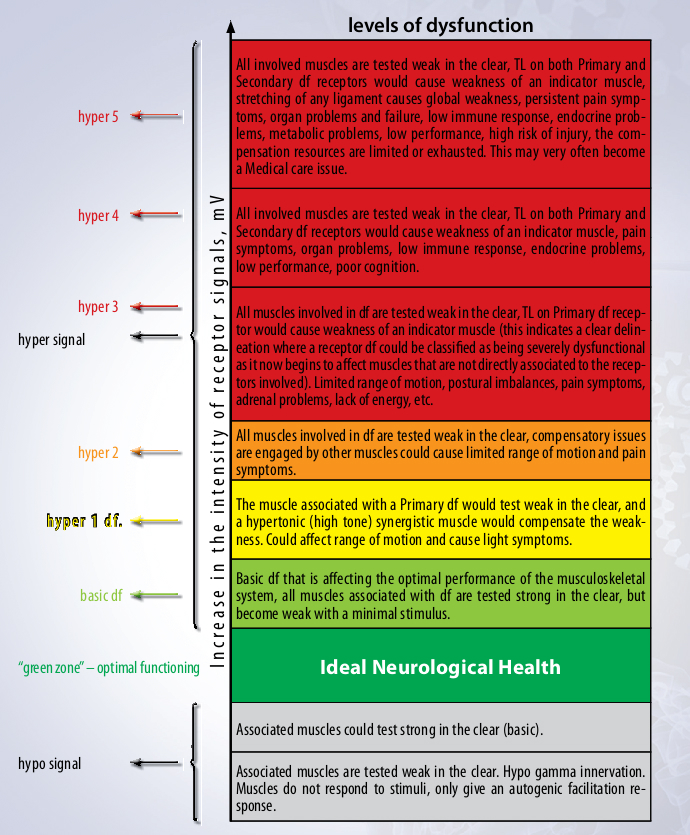 Pic. 1. Schematic scale of the dysfunction levels. The higher is the signal from a df receptor, the more compensations are required by the CNS, which will in turn cause symptoms appropriate to the amount of the required compensations

Doctor Palomar studied the receptors with aberrant high signals and further discovered that only one of these dysfunctional receptors ﬁelds is always prioritized as the Primary dysfunctional zone. This receptor ﬁeld has a high signal and is always compensated for by another receptor, which acts as the Main Secondary compensatory zone and also an excessive signal. If the compensation of MS is not enough, the brain creates other secondary virtual compensations, and if this is not sufﬁcient, the brain will create new dysfunctions that act to increase the compensation for the Priority Primary receptor issue. Dr. Palomar then discovered that the dysfunctional high signal receptors could create fractals of compensations, the compensatory “tree”, which would affect the whole body and result in major physiological, endocrine and immune problems.

Doctor Palomar discovered that any dysfunctional signal would affect the myotatic reﬂex of the muscles (spindle cells) and therefore change the response of the muscles, as assessed using Manual Muscle Testing. The aberrant signal from any type of receptor ﬁeld may cause the functional weakness or hypertonicity of a single muscle as well as it could potentially cause a global hypotonic or hypertonic response. All Primary, Secondary and Tertiary dysfunctional receptors have associated muscles and a particular inhibition pattern, depending on which level of the CNS the signal is blocked.

Once the dysfunctional receptor ﬁelds – both primary and secondary – are found and conﬁrmed, the aberrant afferent ﬂow can be “reset” by a speciﬁc stimulus to both receptor ﬁelds at the same time and elicitation of the Deep Tendon Reﬂex. Under simultaneous stimulation of the main dysfunctional receptor areas, the nervous system receives two signals, which compensate each other allowing the brain to “reset” the previous aberrant operational information.

Doctor Palomar discovered that DTR does not cause just a local reﬂex (as described in the textbooks), but affects the whole central nervous system and inﬂuences the neurological response of the brain. One of the possible explanations could be that as the deep tendon reﬂex itself is a corrective and/or damage control mechanism for the CNS, it allows the brain to evaluate afferent information and make an appropriate response immediately.

When stimulating both Primary and Secondary ﬁelds, the brain receives top priority information from those speciﬁc areas and becomes acutely sensitized to it. Eliciting a DTR helps the brain to reconstitute the aberrant information and reset it to normal levels. This means that the high signal level would decrease to a “green zone” level and there would be no need for the brain to compensate for it any longer. In majority of the cases, the result of this treatment is seen and felt immediately – pain symptoms disappear or decrease signiﬁcantly, range of motion improves, associated muscles are tested as normotonic, and inhibition pattern disappears.

P-DTR works with different levels of neurological organization of the CNS. Dr. Palomar applied the same concept of aberrant receptor signals to the higher regulatory centers of the CNS and had successful results working with cranial nerves nuclei using abnormal breathing patterns to “reset” instead of DTR and other brain nuclei – e.g. basal ganglia, to regulate the motor system response.

The speciﬁc diagnostic, stimulation and treatment tools were developed for 12 pairs of cranial nerves (sensory, motor and visceromotor functions) and allow treating numerous neurological dysfunctions and symptoms. The MMT and speciﬁc stimulus to a particular nucleus are used to deﬁne a normal and abnormal response of the CNS in order to trace the primary dysfunction and the brain’s compensatory strategy for each particular cranial nerve dysfunction. Once the appropriate assessment is completed, the P-DTR protocol is used to conﬁrm the context of the dynamics. When the Primary and Secondary dysfunction have been found, both dysfunctions are stimulated together with the appropriated abnormal breathing pattern being performed, to reset the CNS.

Currently, the P-DTR method is being researched and profoundly studied. The preliminary Electroneuromyographic research conducted by Department of Neuroscience, Physiotherapy and Reﬂex Therapy of Smolensk State Medical University clearly showed the interrelation between the primary and compensatory dysfunctional receptor ﬁelds and conﬁrmed the hypothesis of pairing signals.

In order to analyze the state of central nociceptive and anti-nociceptive mechanisms, the method of exteroceptive suppression was used and showed the reduction of the inhibitory activity of interneurons of the cerebral-stem level providing nociceptive reactions, and this allows to assume that the P-DTR treatment affects not only the peripheral component of pain, but also the central anti-nociceptive structures which help to reduce the pain syndrome.

In order to analyze the state of skin vegetative reactions of a patient before and after the P-DTR treatment, the skin sympathetic potential was used before and after. In most cases, the sympathetic reaction of the patient’s skin decreased signiﬁcantly.

Having observed a great number of patients treated by the method, we came to the conclusion that in some cases P-DTR can be applied as an independent treatment allowing patients to restore correct biomechanics of their bodies and solve many problems without pharmaceuticals. In other cases, P-DTR can be used as a supplementary treatment along with pharmaceuticals and treatment procedures of therapeutic and surgical nature. It is obvious that the treatment by P-DTR allows to restore correct proprioception, acquire normal tonicity of certain sets of muscles, improve posture, get rid of antalgic posture, align gait and further to raise the efﬁciency of therapeutic treatments such as a physical treatment and others.