The interconnection between stimuli from the external and internal environment along with different physiological reflexes has been widely described by many physiologists of the past. Great Russian physiologist, Dr. Pavlov, described many examples where different stimuli caused musculocutaneous or visceral reflexes. Unexpectedly, Dr. Pavlov found that the pectoralis muscles of the dog became very weak after the stomach was removed. In fact, the dog was so weak that it couldn’t stand properly and the muscle stretch reflex was heavily affected. He also studied reflex activities and found that 99% of the CNS activity is actually a reflex.

Dr. G. Goodheart conducted in depth studies of the link between organs and emotions with muscle responses, and discovered that a weak muscle could be an indication of maladaptation of different processes in the body. The classical MMT was and is a base biological feedback tool for AK.

In utero and in newborn babies there are various protective primitive reflexes and each of them has a specific muscle inhibition pattern. Inhibition patterns mean that in response to a particular stimulus the CNS will automatically react with contraction or relaxation of certain muscle groups to perform a necessary action. In adults, new mature reflexes will replace the primitive ones, but the mechanism stays the same. Any nervous system would try to withdraw from dangerous, negative stimuli using its motor system. This is a built in reflex, a normal physiological response. In case of dysfunction, the normal response could become abnormal and form a conditional pathological reflex.

Neurological Muscle Testing has some differences from classical MMT in terms of actual testing, information gathering and its interpretation.

Both classical and NMMT are based on the assessment of the quality of the myotatic stretch reflex.

Classical clinical neurological tests assess muscles passively. With MMT we test the muscle stretch reflex under load. Muscle spindles detect changes in the length of the muscle. As soon as length change occurs, these receptors will send signals to the spinal cord, causing a reflex response of the alpha motor neurons. This in turn stimulates the extrafusal fibers of the agonist muscles and interneurons which inhibit the antagonist. The stretch reflex could be regulated via segmental level of the spine or at higher levels in the brain. The stretch reflex activity could be affected by different stimuli, both internal and external:

Proprioceptive stimulus – any stimulus from a locomotor system. Elevated signals from ligaments will inhibit associated muscles. This is a normal protective response. For example, stretching any joint capsule will inhibit the stretch reflex globally.

Visceral stimulus – there are many receptors in the viscera and elevated signals from these receptors will inhibit or over-facilitate associated muscles. For example, any organ inflammation will cause the reflex alteration. Again, this is a protective mechanism to decrease muscle activity in a damaged area.

Sensory stimulus – the sensory stimulus in one area (from a ligament, for example) could initiate the stretch reflex inhibition response in another area of the body. The example is reflected pain phenomena.

Emotional stimulus – emotion is a complex reflexive reaction, which combines unconscious responses of the autonomic nervous system and conscious cognitive responses – these stimuli also alter the stretch reflex. The most well known example of this is the flight or fight response.

There are two types of responses – physiological, which involves normal reflex alteration, and pathological, which is a response created by the CNS involving additional compensatory mechanisms of the body.

In terms of engineering principles, the stretch reflex arc is a negative feedback loop used to maintain muscle length at a desired value. The appropriate muscle length is specified by the activity of descending pathways that influence the motor neuron pool. Deviations from the desired length are detected by the muscle spindles, since increases or decreases in the stretch of the intrafusal fibers alter the level of activity in the sensory fibers that innervate the spindles. These changes lead in turn to adjustments in the activity of the α motor neurons, returning the muscle to the desired length by contracting the stretched muscle and relaxing the opposed muscle group, and by restoring the level of spindle activity to what it was before. 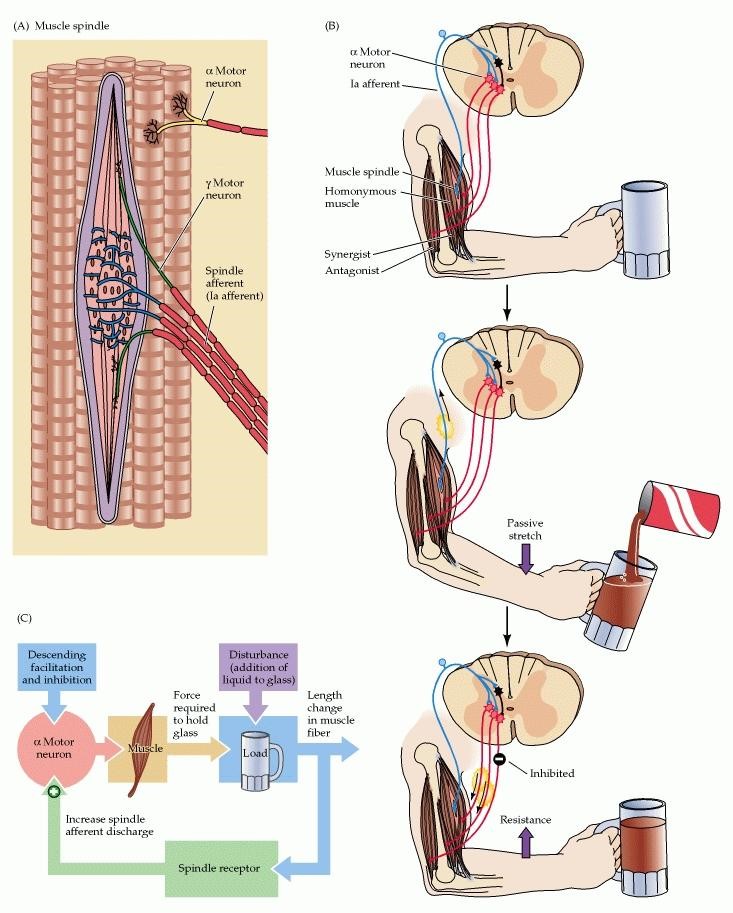 The smaller γ motor neurons control the functional characteristics of the muscle spindles by modulating their level of excitability. As already described, when the muscle is stretched, the spindle is also stretched and the rate of discharge in the afferent fibers increased. When the muscle shortens, however, the spindle is relieved of tension, or “unloaded,” and the sensory axons that innervate the spindle might therefore be expected to fall silent during contraction. However, they remain active. The γ motor neurons terminate on the contractile poles of the intrafusal fibers, and the activation of these neurons causes intrafusal fiber contraction—in this way maintaining the tension on the middle (or equatorial region) of the intrafusal fibers where the sensory axons terminate. Thus, co-activation of the α and γ motor neurons allows spindles to function (i.e., send information centrally) at all muscle lengths during movements and postural adjustments.(ncbi.nlm.nih.gov)

These principles are used to assess the quality of the reflex. The normal working reflex would be able to resist load for more than 5-10 contractions. In other words, one healthy individual could easily perform 5 push ups and the stretch reflex of a brachialis muscle will not be exhausted or inhibited. Of course, the normal response of any muscle would be shown as functional weakness after many repetitions – this is a normal physiological response. The functional pathology should be considered if the muscle can’t perform more than one contraction sustaining normal reflex activity.

Normal muscle function constitutes the ability to perform the muscle’s optimal function as an agonist, antagonist, neutraliser, or fixator. It should be a part of a strictly defined sequence for any movement. Muscles should switch on and off in a precise order to remain a functional group. They should also have the ability to inhibit upon certain neurological challenges, such as when the subject is exposed to parallel lines.

To illustrate the above principle, the abduction of the arm would involve a sequence beginning with the supraspinatus, then progressing in turn to middle deltoid, upper trap, biceps, etc. If the supraspinatus has a hyporeflex (inhibited reflex) it will not initiate the movement and would be compensated by its synergist. This would result in a synergistic dominance, meaning that another muscle would take over for the inhibited one. This synergist itself would become over-facilitated which could eventually cause hypoxia, spasm, and pain.

As was already mentioned above, exteroceptive and interoceptive stimuli, as well as those from special senses, emotional, and cognitive input could have an affect on a stretch reflex. Any kind of stimulus which exceeds the threshold could cause a reflex muscle response. In a healthy nervous system, any stimulus is detected, identified, dealt with and discharged – meaning that the CNS could manage the stimulus and control its electrical excitation. In case of any maladaptation, the reflex could be over inhibited or over facilitated, which would assume that the stimulus exceeded the compensatory capacity of the CNS and recruits the involvement of additional compensatory mechanisms. This means that adaptation isn’t optimal and in later stages we could experience various pain symptoms when the compensatory capacity is exhausted.

What is the compensatory capacity? The CNS compensates at different levels, using all body systems – proprioceptive systems, visual, auditory, vestibular, visceral, endocrine, and emotional resources. In PDTR, we can diagnose exactly what the dominant stimulus is, the systems involved in a dysfunction and levels of compensatory patterns. Commonly, the compensation is structured in a specific hierarchy and multiple systems could be affected.

In Neurological Muscle Testing we learn to differentiate the normal response from a pathological one. There are many issues for a proper NMMT (see the video at video.pdtr-global.com).

The mechanism of MMT

Therefore, we test the muscle in two stages:

This test helps us to analyse the adaptation of a stretch reflex to the load an isometric contraction.

There are 6 responses we may observe:

The idea of the PDTR treatment is to bring all stretch reflex activity to a normal response by identifying the dominant stimulus which caused the aberrant reflexive response.

Position of the patient in NMMT.

It's very important to look at the overall position of the patient. Even before the test, the patient would show specific pathological static and dynamic stereotypes of dysfunction. The NMMT starts by observing how the patient moves, how he sits, how he puts the limb into testing position, and what other parts of the body he engages to compensate the altered reflex. The position of the head, eyes and talus are very important as every stimulus could influence the test results.

Position of the operator

The operator should make himself comfortable when testing the patient and make sure that the testing vector is correct. There is no need to apply extra force as we aren’t testing the strength of the muscle and should not fight the patient. All we need is to assess the reflex quality. In a proper test position, the strongest patient wouldn’t be able to hold steady if the reflex isn’t working properly.

This a very common mistake due to the self-esteem of the practitioner. We all want to look professional and demonstrate great knowledge and skills. Very often, the practitioner fakes the tests just to be right and to confirm his biases and expectations. This is wrong and is also one of the reasons why Classical MMT is considered to be unreliable. Many practitioners “fight” the patient to be right. All we need in muscle testing is to acquire information and analyse it. In PDTR we can work with any reflex – hypotonic or hypertonic – for us it’s another solution and a clue to find the real problem.

Many people say that MMT isn’t reliable… This is true if we don’t know what we are testing and how it works. Issues will certainly result if we can’t understand the response, don’t know how to position the limbs properly, don’t understand functional anatomy, and don’t take into consideration the compensatory tricks of the CNS.

In all other cases, it’s a beautiful reliable tool, especially if you have method for treatment. PDTR is the first ever manual therapy which provides great diagnostic tools and, most important, the logical practical tools for the treatment of any kind of sensory motor dysfunction.